The Supreme Court of the United States (SCOTUS) is the highest court in the nation.

But how much do you really know about it?

Strict Scrutiny podcast hosts Leah Litman, Melissa Murray, and Kate Shaw endeavor to pull back the curtain on all things SCOTUS and the legal culture that surrounds it.

According to Litman, “The mission of the podcast is to democratize the Supreme Court and the commentary that revolves around it.”

Litman is an assistant professor of law at the University of Michigan Law School. She clerked for Judge Sutton on the Sixth Circuit and Justice Kennedy on the Supreme Court. She researches and writes about the Supreme Court, federal post-conviction review and habeas corpus, and the construction of federalism and the separation of powers.

“We want to inform people about the workings of the court, which is a crucial part of our constitutional democracy. Many people may not have time to follow the court’s decision in depth, or they may get their commentary from mainstream media, which oftentimes comes from White men, in a very formal and stiff way. We are three women. We are law professors. We practice before the Supreme Court and write about it in our professional lives, so we have a very different take that our listeners tell us they enjoy,” Litman shared.

Shaw continued, “The Supreme Court is the least transparent institution in American public life. We are working hard to illuminate what happens inside the halls of the highest court in the land.”

Shaw is a professor of law at the Benjamin N. Cardozo School of Law in New York. She teaches legislation, administrative law, and a seminar on the Supreme Court. She also worked in the Obama White House Counsel’s Office, and before that, clerked for Justice Stevens and Judge Posner.

Murray remarked, “The impact of the court’s work is borne disproportionately by minority groups. This really comes across when you look at the commentary. It not only lacks diversity in terms of minority group representation, but also the way in which those consequences for minority communities don’t often come to the fore. Because, if you are a person of color, this work does affect you in ways that may be quite personal.”

Murray is a professor of law at NYU School of Law, where she teaches constitutional law, family law, criminal law, and reproductive rights and justice. She clerked for Judge Stefan Underhill on the District of Connecticut and for Justice Sotomayor when she served on the Second Circuit.

“There wasn’t a podcast about the Supreme Court, and there certainly wasn’t one hosted by women with our perspectives. I thought it was something that would be nice to have,” Litman said. She became friends with Murray after Murray wrote a review of a law article Litman wrote. Shaw met Litman after doing a podcast together.

Their core listening audience consists of law students, professors, teachers, and other people who don’t have law backgrounds, but want to understand the innerworkings of the Supreme Court.

“We want our listeners to know that there exists a cadre of experts who report on the Supreme Court and constitutional law that go beyond the kind of usual suspects you’ll see, and that there’s often a more diverse and heterogeneous group than is reflected in the way the Supreme Court is covered by mainstream print and radio. With our in-depth legal analysis and our esteemed podcast guests, we have a unique way of bringing those new lines of expertise to the fore,” Murray said. 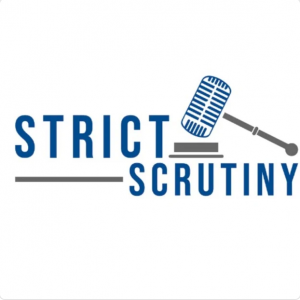 “Our podcast is also about the lawyers who do really fantastic work. These lawyers aren’t considered members of the close-knit Supreme Court bar, but they deserve to be recognized for the hard work they do on behalf of our judicial system,” Litman added.

“We are particularly proud of amplifying a lot of really amazing voices in the ecosystem surrounding the Supreme Court,” Shaw quipped.

Ironically, all three ladies stated that their interest in law and government was somewhat sparked by being on the debate team in high school (a fun fact that they did not know about one another before this interview).

Why the name “Strict Scrutiny”?

“We chose it for two reasons. One, it’s a technical legal term that describes the type of review that courts use when evaluating certain kinds of law that draw distinctions on the basis of certain characteristics like race and sex,” Shaw explained. “So, it’s a technical term of art, but sort of a double entendre, because we are strictly scrutinizing, or closely reviewing, the work of the Supreme Court and federal courts.”

Shaw loves co-hosting the podcast, because she gets to spend an hour going really deep into what these cases stand for, and ultimately, what they will mean to our society. Murray loves to hang out with her two co-hosts, and because she specializes in specific topics in constitutional law, the podcast helps her to branch out more. For Litman, she loves to have fun… and hearing from women listeners who say they really enjoyed the show.

Litman was born and raised outside the Twin Cities in Minnesota. In her downtime, she loves to swim, go on hikes, do yoga, Pilates, and take pictures of her mini golden doodle puppy.

Murray was born in Brooklyn, NY, and raised in Florida. She is married with kids, and in her downtime, she loves to hang out with her girlfriends. Pre-COVID, she did so by taking a hip-hop dance class with them, but now, they do it via Zoom. She also enjoys keeping up with Meghan Markle, the Duchess of Sussex.

Shaw was raised in Chicago, IL. She is married with three kids, and in her downtime, she loves running, doing yoga, and baking with her kids.

Litman and Murray both agree that the best advice they’ve ever gotten was to “fake it until you make it.”

“A mentor told me that you have to project the confidence that you obviously lack, because if you allow your internal self-doubt to win, you’ll be really limited—not only in opportunities, but in respect from people. So, don’t wait until you feel perfect or when you’re one hundred percent ready,” Litman stated.

“I tell my students that all the time. It was really powerful when I heard it, because most people have no idea what they’re doing. We’re all flying without a net most of the time,” Murray said. “But the people who seem to be the most successful are the ones who sort of carry it off with aplomb and let you think that they know exactly what they’re doing. So, for me, I often say things authoritatively, even if I’m not as authoritative as I would like to be.”

For Kate, the best piece of advice she heard was from a speech at the American Constitution Society in which Dawn Johnsen said she doesn’t regret anything in relation to not being confirmed to the head of legal counsel during the Obama administration. “She actually ended up withdrawing, but she would not change any of her choices. In life, don’t trim your sails because you’re worried about what the choices you make today will mean down the road. She was saying, pursue what you are passionate about, and fight for the things you want to fight for. Then, let the chips fall where they may. Her speech was very inspiring,” Shaw said.

You can tell by the banter of these three very accomplished ladies that they are genuine friends. The podcast is expertly produced by another amazing lady, Melody Rowell.

When asked about their hope for the future of the podcast, all three unanimously agreed that they want to keep expanding their audience. And since it’s homegrown, with no sponsors, they would like to keep paying a living wage to their producer, Rowell.

UTR: Punch up the Jam

UTR: She Wears The Boots: A Podcast for Women Veterans