If you are a mixed martial arts fan, you know the famous voice of the UFC …

The man in the fancy tux is Bruce Buffer—and if his voice sounds familiar, you might also know of his brother—the voice of boxing’s famous trademarked catchphrase “Let’s get ready to rumble” Michael Buffer.

But Bruce is far more than a voice.

Bruce recalls how, at 28 years old, he saw the name of the owner of the voice of boxing on screen, Buffer, and thought, “Who is this guy? In short, it turned out to be my long-lost brother I never knew existed.” From that moment on, the brothers became close, and just four short years later, Bruce started managing Michael’s career.

He helped trademark his brother’s phrase and successfully built the multi-million-dollar brand. Although Bruce failed to keep his promise to stay out of announcing, he pursued entrepreneurship, as well, owning and running over ten companies and doing his own marketing, branding, and podcast.

In fact, the “bug” of entrepreneurship “bit” him long before he met his brother. Bruce left college after two years stating that “College teaches you knowledge, not application.” He decided it was time to apply himself and began running multiple companies in telemarketing and security, to name a couple.

At just 19 years old, he started his first corporation. Since then, he has branded and marketed many items, including cologne, facial products, energy products, and a bourbon called Puncher’s Chance, which will be sold internationally.

He also became a motivational speaker and author of the book It’s Time!: My 360-Degree View of the UFC.

Despite having made millions in business, his true passion and calling for announcing came later in life, when he was 37 years old. 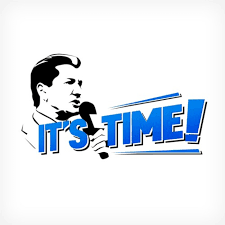 “I was a millionaire before all this,” Bruce said. “I made it, lost it, made it again, lost it. Eventually, you realize it’s time to keep it.”

His role in catapulting his brother’s five-word catchphrase in boxing helped Bruce see that he is “a brander and marketer first and foremost.” He was also acutely aware of the growth potential of the UFC.

The popularity of mixed martial arts was dwindling among fans before Dana White purchased the UFC and turned it into the fastest and largest growing sports event in the world. It was during this time that Bruce became the voice of UFC. Suddenly, “I can’t even walk down the streets of Brazil without being noticed,” Bruce shared.

Now a professional mixed martial arts ring announcer and the official octagon announcer for UFC events, Bruce is introduced on broadcasts as the “Veteran Voice of the Octagon.” He announces his catchphrase, “It’s time,” before the main event of the UFC.

He also founded and hosts his own show, the It’s Time podcast, where he brings his special brand and flare each and every week while chatting with celebrities, fighters, and individuals from all walks of life about pop culture, news, and of course, mixed martial arts and the UFC.

Established in 2012, the It’s Time podcast with co-host TJ Desantis also covers current events and world topics such as life during the Covid-19 pandemic. Guests include movie stars, celebrities, comedians, UFC past and present fighters, show promoters, and more. Known as “the “life-styles podcast of the internet,” Bruce and co-host TJ keep things current by discussing upcoming Fight Island UFC events as well as the protocol around (and testing for) COVID-19 Bruce deals with per UFC’s safety and protocol rules currently in place to be able to announce UFC 251.

Although it may seem like Bruce has enough on his plate to keep him busy 24/7, he still finds the time to enjoy Poker, a skill he picked up as an eight-year-old boy. The interest remained over the years, and now, he is a ranked professional in the game. He has appeared in 60 events to date and claimed the win on two occasions. His first win came on July 23, 2010, at the “No Hold ‘Em Main Event,” for which he was awarded $75,000—the highest take from a single event. Two years later, “The Veteran Voice of the Octagon” won his second event at the 2012 California State Poker Championship in Los Angeles, earning $11,500.