Okay, a lot of people love the Boston Red Sox, but here was a NEW YORKER professing that love. And for the uninformed, that’s simply unacceptable.

But Marc quickly discovered that, since he couldn’t talk to his friends about his favorite baseball team, he could write about them, and anyone could read it.

So began his lifelong enjoyment of writing and content.

“When I started the blog, it never really became big, but I was able to interact with a few fans. And that’s all I was really going for, at that point. But it introduced me to the world of blogging, which is when I realized, ‘Oh wow … people can make money by writing!’ Writing really brought me into this entire industry. It was the starting point, and it’s been a really big part of my life ever since. I’ve always loved it,” Marc explains.

As a new high school graduate, Marc wanted to start a podcast, but he quickly realized it was a huge commitment. He had a few false starts before launching Breakthrough Success—an offshoot of that love of content he talked about, and his next step not only for his personal growth, but for his business.

Before officially launching, “I reached out to a few people and invited them to be on my ‘non-existent’ show,’” Marc says, “because at that point, I had to make myself accountable. But then, when people actually began saying ‘yes’—people with whom I’ve built business relationships over the years—I had to actually launch.

“Breakthrough Success focuses on business-growth strategies and personal development. Because yes, you’ve got to have the knowledge, but if you’re not implementing that knowledge, what’s the actual point? So, we combine inspirational stories about people who overcame a lot of odds to achieve success in business with strategies you can use to advance your client pipeline, for instance.

“You don’t want to just inspire people without giving them things they can actually do. At the same time, you don’t want to give them all the things to do without a game plan and inspiration to take action.” 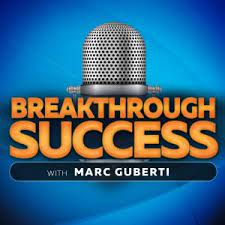 From a business perspective, Marc uses the podcast to establish and build relationships with his guests. His network has since grown with referral partners, collaborators, and clients. When it comes to inviting guests on, Marc says:

“It can be easy to get a lot of awesome people on your show. I think when you’re first getting started, the process can be nerve-wracking. Especially if it’s someone whose work you enjoy and have been admiring from afar for a few years. But if you continue to reach out to those people while building up your shows, it gets easier over time to get the ‘yes.’ It then makes sense for them, because they’re getting more content and visibility from those kinds of appearances.

“Podcasting is an amazing networking tool. Not only do I get to ask questions, engage in conversation, and build friendships, but I also get to present the information to listeners, who also benefit. They get the insights that can help them with their freelance business, their next book, or with their digital marketing. It’s an ‘everybody wins’ scenario.”

Marc is also a big believer in repurposing content. From social media posts to YouTube videos, he is a master at the art of repurposing his podcast content.

“Repurposing content is a great strategy, because you’re taking this existing piece—like a podcast—and spreading it across multiple platforms. But the repurposing element does take time,” he explains. With over 700 episodes since 2016, Marc sure has a lot of content to repurpose.

Breakthrough Success offers inspiration, education, and motivation. Have a listen, and you’ll find yourself motivated to implement the terrific strategies he and his guests share in your business, too.