When you hear topics such as “international business,” “foreign policy,” and “international security” being discussed, what gender normally comes to mind first? If you’re like most people, your immediate thought is of a man discussing, spearheading, and taking the lead on such topics.

But did you know:

You might also be surprised to learn that The Center for Strategic and International Studies (CSIS) developed the Smart Women, Smart Power Initiative and podcast in 2014. The Smart Women, Smart Power (SWSP) Initiative convenes top-level women leaders in foreign policy, national security, international business, and international development to amplify their voices, spotlight their expertise, and discuss critical and timely issues.

“The SWSP Initiative and podcast aims to normalize women as experts and thought leaders. We want to amplify the voices of women while providing them a platform to demonstrate their expertise,” said SWSP podcast host Beverly Kirk. “What I want listeners to learn from this podcast is not a lesson on a topic. What I want them to take away is that, when you think of someone who is an expert on issues such as arms control, nuclear proliferation, and other grand strategies, it just might be a woman… that it’s every bit as likely as it being a man. Instead of the typical default image of an expert being a man, I want listeners to learn that image can be, should be, and very often is a woman.”

CSIS is a think tank. It has been ranked the #1 Think Tank in U.S. by the Global Go to Think Tank Index. What exactly is a think tank? “We’re a bipartisan and nonpartisan nonprofit research organization. Basically, we are dedicated to advancing practical ideas to address the world’s greatest challenges,” Kirk said.

Kirk has worked for CSIS for nearly eight years. She is a fellow and director for outreach in the CSIS International Security Program and director of the CSIS Smart Women, Smart Power Initiative. Before joining CSIS, Kirk was a journalist and worked for local and national news organizations, including NBC, NPR, and PBS. She spent much of her career focused on domestic and international politics and government. She also founded a media consulting company and has expertise in media curriculum design. 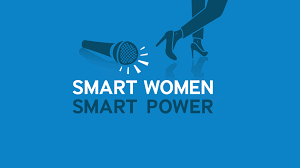 The Smart Women, Smart Power biweekly podcast features powerful, in-depth conversations with women leaders from around the globe who are experts in foreign policy, national security, international business, and international development. “Our core listening audience has a global reach. The top countries outside the United States are Canada, the U.K., Australia, South Korea, and Japan. According to our podcast stats, our listeners are in that coveted 23 to 44-year-old demographic,” Kirk stated. “The majority of our listeners tend to be women, although we cover issues and topics that have nothing to do with gender.”

When it comes to choosing her guests, Kirk said:

“We have three dozen programs at CSIS, so there is a cadre of people who work in-house who I have access to and who appear on the podcast. As a former journalist, I’m constantly reading to see what people are doing in the areas of national security, foreign policy, international business, and development. Then there are the random (and really fun) methods of finding guests. I happened to be walking down the street in old town Alexandria, VA, when I saw some young girls selling samosas and lemonade. I love a good samosa, so I bought one and asked them why they were doing it. The young girl spearheading the whole thing was raising money for school supplies in Nepal when the 2015 earthquake devastated the area. So, I invited her onto the podcast to talk about what she and her friends were doing.”

The name of the podcast, Smart Women, Smart Power is intriguing. We can all think of smart women we’ve known or encountered, but what exactly is “smart power?” Kirk explained, “Smart power is a blending of hard and soft power strategies. For example, you’re acknowledging the need and necessity of having a strong military (hard power), but at the same time, you’re investing in alliances and partnerships (soft power) to expand your influence. You’re using a combination of hard and soft power to be and to act smartly.”

What Kirk loves most about moderating the podcast is talking to people. “I spent 20-plus years as a journalist, so I’ve always loved learning and talking to people about topics that aren’t necessarily in my area of expertise,” she said.

Kirk was born and raised in the foothills of Appalachia in Burkesville, KY. “I grew up in the middle of nowhere—it’s an extremely rural area. On a good day, we had a population of 6,000, and I jokingly say that, on any given day, you’ll find more farm animals than people. But it’s an incredibly beautiful part of the country, and that’s why my family has been there for six generations.”

Kirk is the baby of the family, with two older sisters and a brother. The advice she lives by today is the advice she received from her parents.

“They told me I had to be twice as good to get half as far as the next white person. I think that was the standard advice given to children who are from underrepresented groups. But I consider that excellent advice, because if you’re constantly working twice as hard, it’s guaranteed you’re doing a great job,” she stated.

In her downtime, Kirk loves to read, swim, and do yoga or Pilates. And an upside to this COVID-19 pandemic is that she now she likes to cook. “My cooking skills have definitely improved because of the pandemic,” she laughed. She also loves to travel. “I had the opportunity to go on an education tour to Israel and the West Bank before travel restrictions set in, and it was amazing. I had studied about the Israeli-Palestinian conflict in grad school, but to actually be there was incredible.”

A book that Kirk just started reading was written by Martin Luther King Jr. in 1967 titled, Where Do We Go From Here: Chaos or Community? “The things he wrote about some 50 years ago are many of the same issues in the news right now. The book spends time talking about income inequality, poverty, and how to deal with racial inequities. I’m reading it and saying to myself, ‘Wow… in 50 years, we’ve not figured out how to resolve these exact same issues. Someone could write this same book right now,’” she said.

Although Kirk started out as a broadcast journalist, her late mentor Dr. Vince Davis knew she would eventually work for CSIS. “When I was in grad school, Dr. Davis, who had the foresight and forethought to know I was more of an academic and needed to do more scholarly work, always told me that after I get done ‘playing’ (that’s what he called it) in television, I should go get myself a job at CSIS and put my brain to work in a think tank. He was not being dismissive of people in television news; he just knew that I had more to offer. And, I still have a lot of work to do to become a scholar. He died before I started working at CSIS. That is my one regret—that he didn’t see me fulfill the prophecy he envisioned for me so many years ago,” Kirk said.

A video on the CSIS website encapsulates what the podcast is doing to further empower women leaders. In it, the President of the European Central Bank and former International Monetary Fund (IMF) Director Christine Lagarde, says: “Bringing women into the workplace reduces inequality. One of the major inequalities is that women are left out, under-utilized, over-exploited, and generally underpaid.”

By furthering the Smart Women, Smart Power Initiative and podcast, this will one day be a thing of the past.

A Podcast For Home Haunters