Ali Brown—host of the popular podcast, Glambition® Radio with Ali Brown—is one of the earliest and most influential women in the entrepreneurial space.

When we met to chat about her adventures in podcasting, Ali quickly described herself as “basically unemployable.” She went on to explain that, while she’d done amazingly well in school and in the corporate world, she was disappointed in the journey. As she changed jobs and tested out different positions, none of them felt like the right fit—they certainly weren’t fulfilling or things she loved.

Then, while working at an ad agency, a glimmer of hope walked in the door: a freelancer named Eric. Ali jumped at the chance to find out more about how this guy had created an opportunity for himself that gave him the freedom to come and go as he pleased.

And that was it—Ali took the red pill. She bought Bob Bly’s Guide to Freelance Writing Success, and dove into the world of freelance copywriting. She had no idea then how valuable her copywriting skills would become. 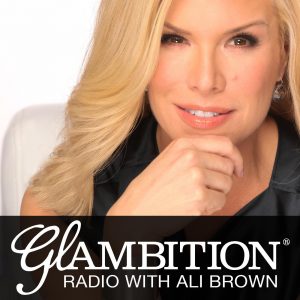 That process evolved her business into an Inc 500 company.

Ali shared: “Giving myself permission to adjust the model as I evolve and shift has been key to my continuing success. Most people need to give themselves permission to do that—to take the red pill.”

Part of Ali’s personal evolution was the launch of the Glambition® Radio podcast she’s now 200+ episodes deep in. But it didn’t happen the way you might think.

In 2014, her business had become a massive machine with a huge team, endless launches, complicated marketing funnels, and very specific formulas. And it all worked. But Ali was creatively starved.

One afternoon, while on a call with her entire team, she announced, “I want to do a podcast.”

Her team responded immediately, getting strategic and mapping out a launch plan with upsells, downsells… the whole nine yards. Ali stopped them.

When I asked Ali about her favorite episode, she teased the episode with Jennifer Cam, whose metaphor for the affiliate game couldn’t be repeated.

Ali recognizes she’s not a mass market brand (taking that red pill, again). Getting clear on her lane freed her to stop comparing and worrying about where her podcast is on the charts. Now, she enjoys a comfortable “knowing” that her audience falls in love with the truths she shares.

And clearly, she’s given herself permission to have fun with her show!

Ali’s advice to you, the Podcast Magazine reader?

“Start something you love, and make it so delicious, it becomes one of the best parts of your week.”

Cutting through the Culture Crap

UTR: A Kids Book About: The Podcast