What happened to the independent media we could trust?

The old media we depended on for decades to bring us full, unbiased stories has become over-the-top partisan and filled with negativity. It seems more concerned with corporate profits and scaring the crap out of people than about delivering the news.

What happened to journalists asking the tough questions instead of backing away from challenging conversations with powerful people?

What happened to true investigation and digging deeper than the PR-friendly, shiny, clean surface?

It’s easy to feel like that kind of neutrality and objectivity has disappeared in today’s world, even when it comes to business news. Many of us have been left asking, “Will the true independent media please stand up?”

The good news is that there is somewhere you can find what you seek.

Turn off your TV. Put away that newspaper. And hit “play” on podcasts … because the new media’s got what you’re craving.

Let me introduce you to Kinsey Grant and Morning Brew.

As a child, Kinsey spent Sunday mornings doing the crossword puzzle in the newspaper with her Dad and discussing the weekly news. “I’m a genuinely curious person; I have been my whole life. I knew I wanted to go into journalism at a very early age.” She chose business journalism for the connection with community and the impact she could have.

Her background in multimedia journalism led Kinsey to joining Morning Brew—a daily business newsletter—as a writer. She then became an outspoken advocate for creating a podcast that would allow her to dive much deeper into the trends and topics covered in the newsletter.

So, Kinsey and her team locked themselves in a room to brainstorm, and by the time they came out, Business Casual was ready to become a reality. Their concept: create a show that surprises and delights the audience in new ways, and to go beyond highlights into the tough questions and in-depth conversations that challenge the way people think.

They played around with the idea of an industry-specific podcast, but as revealed by a quick scroll through their show’s episode titles, they took the risk of creating something more diverse: 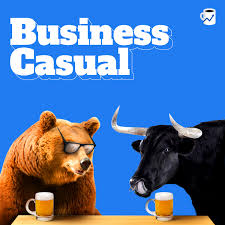 The risk paid off as their audience exploded. Their unique blend allows listeners to discover information and ideas that are outside the box—those they might not otherwise encounter—and it’s created an incredibly valuable show.

With two shows a week, Business Casual episodes alternate between a “Why It Matters” overview and a deep-dive conversation around each topic they tackle. Instead of focusing on proving their own point of view or perspective, they intentionally book guests with opposing viewpoints to explore them.

Kinsey’s personal focus is to be the voice of the listener. She’s intentionally worked at building her confidence in pushing back to get to the real answers behind those that have been prepared. She asks the questions we, the listeners, want answers to—and those we need answers to, but might not be brave enough to ask. Her inner compass clearly points her toward an unbiased journalistic integrity and open curiosity that’s too often missing in interviews with powerful people like Andrew Yang, Ray D’Alessio, Scott Galloway, and more.

When I asked if she’d ever had a guest walk out of an interview following a tough question, or if she was afraid one might, her stance was clear: she knows it’s an honor to get the time and conversation, but she won’t be bulldozed. “We always say we would rather someone walk out of an interview than feel like they walked out without thinking differently in any way.”

And that same focus on thinking differently applies to how Morning Brew invites audience interaction, too. Listeners are encouraged to reach out on Twitter, or even directly via text message, to offer their thoughts on shows, ask questions, and share perspectives.

The overarching goal for the Business Casual podcast? “To answer the most important questions in business with the most interesting people in business.”