When Leah Badertscher first started The Art School, and subsequently, The Art School Podcast, she did so with the specific intention of merging the pragmatic with the spiritual. She had longings to create things in the world in a way that was good for her soul and would evolve her as a person.

Leah went looking for a way to fuse her creative capacity to paint and write. She sought mentorship, structure, and training to help her do so in a way that would not only benefit herself, but others, too. Of course, at the end of the day, she also wanted to be able to make a living from her creativity.

After searching far and wide, gathering only smatterings of guidance here and there, she was unable to find even one place that brought together creativity, intuition, spirituality, and psychology with a pragmatic, business-minded entrepreneurial approach.

Finally, it became clear—she needed to fuse all her eclectic interests and passions together to create what she was craving. The Art School is that place. Opened in 2018, the school is a place where “creative powerhouses, visionaries, and leaders come to discover how to bridge the gap between the dream and getting it done, between having the ideas and the potential, to becoming a creative force of nature who actually builds that dream out in the world.”

Her first group coaching program turned out better than she expected. It was the ultimate experience for her students who came in with a dream and then worked on their own creative process as well as the universal.

“I believe that harnessing the Creative process—with a capital C—is an innate, inherent part of being human. And if you get in touch with that inherent ability we all have, with that creative life force we all have, and develop it, you can apply it over and over again in all areas of your life.”

Speaking to her curriculum, Leah says, “I made up a lot of it on my own. I was told by really great coaches that yes, you can make money doing certain things, but art is probably not one of them. And I just didn’t believe it. I questioned. What if there are two roads? One is a continuous submission to the way things are traditionally done. The other, though, acknowledges that being creative isn’t only about making art. It’s about being your own creative authority. Maybe that’s writing the narrative of your life. That sounds more fun! And maybe, the more you do that, the more people you attract who are like you… and you can be an example for them.” 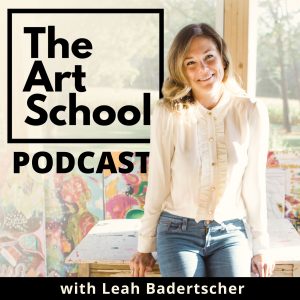 When it came time to start her podcast, Leah took all the tools she had applied to creating The Art School and brought them into her new creative expression, too. That included defining ahead of time how she wanted the experience to be for her. She knew she needed to leave behind perfectionism, calling in a new way of being. She recognized the public nature of this new endeavor, requiring her to really put her own beliefs “out there,” as she modeled a different way of operating in both the art world and the coaching world.

“Once it’s out there, it’s just there. People can think what they’re going to think. So I made the decision in advance to make the show something that would be good for my soul and for my creativity… and to put great energy into it.”

Leah thinks that the energy with which you create something is the energy that permeates the whole process and “product.” It’s also what people receive. She knew she didn’t want people receiving her insecurity, or her perfectionism. So, she made herself a deal that for at least the first year, she was going to be disciplined in her thought processes. She would make every single episode herself, deciding ahead of time that each was wonderful. After each episode, she would accept that it was absolutely fantastic as is, and exactly what it should be. Any further judgment was not up for conversation.

She chose to surrender to the process, enjoy it, and let her voice continue to develop while giving herself the grace of being a beginner.

She said to herself, “I’m going to do 52 episodes before I even let myself evaluate how this is going. The only thing I’m allowed to think is, ‘This is good, Leah. You’re doing something good.’ And then at the end of 52, maybe I’ll lift that up and decide, okay, are there things I want to evaluate? What’s working? What’s not? What do I want to do differently? I simply decided ahead of time that podcasting would be a kind, loving, creative process for me.”

As an artist, she considers the choice to listen to her show an act of faith. Podcasting is a very interesting medium—despite being in front of a microphone and laptop, unable to see the faces who are listening, you are still connecting with people. You’re speaking right to them. To Leah, when someone leaves a review or reaches out to her to say, “I love your podcast. I feel like you’re just talking to me,” it’s a profound gift—a miracle, even.

“Every time that happens, it’s like wow… it never gets old. Receiving feedback is one of my favorite parts of the process—which is ironic, since it’s absolutely the part I can’t control.”

What an amazing example Leah has become in the realm of being your own creative authority! Tune in to her show for more role modeling and inspiration.