Tyrell Connor and Daphne Penn are college professors and the hosts of Black and Highly Dangerous. This podcast tackles issues related to the Black community and features experts who study and research these subjects without having to read books or be in an academic classroom.

“Many of our listeners classify us as ‘Infotainment,’ because we have that casual conversation with educational materials attached to it,” Tyrell explained.

“Enlightenment through education is seen as the oppressors’ worst fear. If we enlighten people, then we cannot hold them back. Black and Highly Dangerous provides knowledge to listeners, and that is dangerous to people who want to maintain the status quo!”

Tyrell and Daphne first met in graduate school at Perdue University as they were each pursuing their doctoral degrees. After they graduated, Tyrell had an idea.

“I was driving to work about an hour each way,” he said, “So I started to listen to podcasts. It dawned on me, maybe I can start one, too. I called Daphne, as she was already into the field and had thoughts of doing a podcast, too.”

“Tyrell and I already had a good working relationship,” Daphne added. “When he was the president of the Black graduate students of Purdue, I was the social secretary. We were both very interested in and passionate about not just conducting research for the sake of conducting research, but for the bigger purpose of creating change with the knowledge that we produce. Our career is in academics, but we want to have a broader impact.”

They explained how we are living during a time when misinformation is at an all-time high, and many of those focused on in studies never get to benefit from the information gained.

It was their shared motivation to tackle that misinformation that initially attracted them to the podcast platform.

“We are both first-generation college students of color. We felt kind of obligated, as we have so much access to so much information. And when we come home, a lot of our friends and family members don’t. We wanted to be that bridge, which also supplements what we already do as educators in a college setting,” Tyrell explained.

The podcast platform seems perfect for helping them accomplish another of their show’s mottos, too: “Bridging the gap between academia and the people.” They are now three years in and are looking to grow. To that end, they recently landed a book deal, and the book will follow the same format as the podcast. Its working title is The Dark Side Of Reform, and it is due for release toward the end of the year or in early 2022. 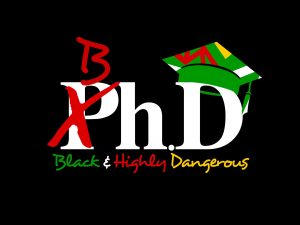 “Doing the podcast in times of personal struggle or when a lot is going on. When that happens, we have been able to cover the other, whether it was while Daphne was finishing her PhD or something else. One statistic that Daphne and I are extremely proud of is that we have not missed one Wednesday release in three years!”

The friends also touched on an important point related to co-hosting a show versus having a solo podcast—their ability to support each other through challenges. I wondered what other ways their partnership works well for them.

“When Tyrell first approached me, I had wanted to have a podcast, but it never got off the ground. I couldn’t find the time. I could just never do it. Having a partner who is depending on you makes you show up in a way that you might not show up for yourself.”

“Plus, each person having a particular role in the production makes it easier to balance things,” Tyrell added.

“One of the things I appreciate most about Tyrell is that he’s just like, ‘Let’s dive in!’ whereas I am often a really hesitant and doubtful person. Another great part of being part of a team is that you can complement each other well. I’d still be waiting to do this and trying to make it really perfect, if things hadn’t gone the way they did.”

“Daphne is really good at reeling me in. She’ll say, ‘Wait, did we consider this? Did you look at this?’ Then, we usually add it to the plan before moving forward.”

Any advice for aspiring podcasters?

“A podcast is at least a part-time job… it’s fulfilling work, but it is work,” Daphne said.

So what has been their worst day in podcasting so far?

“We landed this great interview with a scholar—her work was fascinating,” Tyrell said. “At the time, we were recording it through Zencastr and usually had a backup, as well. At the end of the interview, I realized that both systems had failed. We tried to talk to her, but she didn’t want to do the interview again! We have since changed what we use, so that can’t happen again.”

With their full academic careers, I asked how they handle their different commitments and continue to come together for the podcast.

“Recording it weekly with two different workflows was not going to work,” Tyrell explained. “We had to figure out a way to be consistent, so we decided to start stockpiling interviews. Every few months, we worked out about a two-week window during which we arranged about eight to 10 interviews—about three months of content.”

They learned as they went, tweaking and adding components like their “Old or New” segment. Originally, they used to go straight into the interviews, but that format didn’t allow their listeners to really get to know who they are. So now, before they get to the interview, they usually spend about 30 minutes just talking about the hot topics of the week. Their show now generally comes in at about an hour and 15 minutes, giving listeners the option to jump straight to the guest interview or listen to their weekly discussion, too.

As the pair looks toward the future, Tyrell said:

“We want to continue to be a resource for our community. Sometimes, podcasters come into the industry seeing the big podcasts and wanting to make all this money, be full-time, etc. That can happen, but it’s usually going to be a longer journey.

“One of the reasons I started the podcast is because I was listening to other popular podcasts expand their content to talk about other socially relevant subjects and content they didn’t have the expertise to discuss. They were reaching millions of people. With our background and knowledge, I would listen to those and often be like, ‘Ah… that’s just not accurate.’ But so many people were taking it in. I thought, ‘You know what? Let’s create our own platform where people can come if they want to be accurately informed. And not just by music artists and celebrities, but from actual people who spend their lifetime doing this work.’”